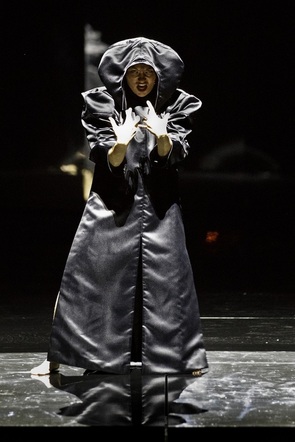 Tanya Tagaq as the Old Woman in Apocalypsis.
This article originally appeared in the Fall 2015 issue of Queen’s Quarterly, a journal published by Queen’s University in Kingston, Canada.

And there appeared a great wonder in Heaven: a woman clothed with the sun, and the moon under her feet, and upon her head a crown of twelve stars: and she being with child cried, travailing in birth, and pained to be delivered. Revelation 12:1-2.

The biggest event at Toronto’s Luminato festival in June was the staging of R. Murray Schafer’s Apocalypsis. In three performances, from June 26 to 28, at the Sony Centre, about 1,000 singers, dancers, actors and instrumental musicians participated in the Canadian composer’s portrayal of the End of Time. Choirs, especially, were central to the production – and in Apocalypsis there were twenty-four of them.

Throughout his career, Schafer has shown a penchant for elaborate music-theatre works, often based on mythological themes. His Patria cycle consists of twelve substantial pieces that all, in various ways, combine music, dance and theatre. (He uses the umbrella term “theatre of confluence” to describe his works.) Some of his large-scale pieces, such as The Princess of the Stars, The Enchanted Forest and The Palace of the Cinnabar Phoenix, are intended for outdoor performance – and he’s acquired a reputation as the composer who makes his audiences climb mountains to see his work. But Apocalypsis is an indoor piece – although the indoor space needs to be pretty big.

Part I of Apocalypsis, “John’s Vision,” is largely but loosely based on the biblical Book of Revelation, written by St. John the Divine in the First Century A.D. The things John envisioned while in exile on the Isle of Patmos are incorporated into Schafer’s oeuvre: the Archangel Michael, the Antichrist, the Four Living Creatures, the Whore of Babylon and various other apparitions appear as dramatic characters. Here, Schafer’s music is clangorous and dissonant, his striking effects achieved through the use of large musical forces.

Part II, subtitled “Credo,” is a musical imagining of the Eternal Kingdom that lies beyond the destruction of the universe. However, its text isn’t the standard credo from a Roman Catholic mass. Rather, it’s excerpted from the work of a 16th-century Dominican friar named Giordano Bruno. It begins “Lord God is universe, universe is all that exists,” and goes on to describe the universe as eternal and immeasurable, encompassing all space and time. (Bruno was burnt at the stake for his support of the Copernican model of the cosmos.) Here Schafer’s music is mystical and ethereal – but as with the first half, size counts, and he paints with a broad brush.

Luminato’s Apocalypsis was only the second fully staged production this piece has received since it was composed in the late 1970s. The premiere took place in London, Ontario, in 1980, to celebrate the 125th anniversary of the city, and was mounted by Western University’s Faculty of Music. I was a student at Western at the time. I sang in the chorus for Apocalypsis, and also helped Schafer build “angel wings” – large sheets of aluminum that emitted a thunderous roar when shaken. As an aspiring young composer, Apocalypsis made a profound impression on me. And I wasn’t alone in my reaction: Toronto Star music critic William Littler described it as “one of the most spectacular events in the history of Canadian music.”

For Luminato’s Apocalypsis, I arrived on opening night in a state of nostalgia-tinged anticipation, and a sense that I had privileged “inside knowledge” about the piece. I have no idea how many other people who attended this Apocalypsis were also present at the premiere. But if there were a few others besides me, I’m sure they quickly realized that they were witnessing a staging that was quite different from the one they saw at London’s Centennial Hall, thirty-five years ago. Describing what unfolded on stage at the Sony Centre will take more than a few words.

The dominant force behind the new production was the Samoan-born director Lemi Ponifasio. He’s an artist cut from the same cloth as Robert Wilson, blending theatre and choreography in to one art form, and with a penchant for slow, deliberate motion. Saddled with a cavernous hall with notoriously bad acoustics, he turned the Sony Centre into a giant “black box” theatre, stark and unadorned, and chose to amplify the voices of some of the soloists.

The stage – dominated by a large glass cube in the centre – was used as a platform for a succession of choirs, solo singers, dancers and actors. The instrumental musicians were largely kept out of sight, but conductor David Fallis was a visible presence throughout Part I. As well, there were some film projections that could have been out-takes from F.W. Murnau’s Nosferatu.

Apocalypsis began, surprisingly, in the theatre’s aisles, with choristers shouting as they marched forward: “The Lord of Hosts has a day of doom waiting,” “Then man’s pride shall be brought low,” and other dire prophecies. Eventually, they took to the stage, and once there, moved en masse, walking in processions or raising their arms in unison. The chorus’s gestures were kept simple – a sensible acknowledgement on Ponifasio’s part that they weren’t professional actors or dancers.

Farther downstage, a dancer in vaguely Japanese garb (Arikitau Tentau, from the tiny Pacific nation of Kiribati) presented herky-jerky arm positions, a cross between karate and some kind of semaphore signals. The stylistic attributes of his performance – deliberate, taut and precise – turned out to be the dominant features of much of the dance and stage-movement throughout the first half. Another dancer (Helmi Prasetyo from Indonesia), portrayed The Beast, nearly naked and prowling around on all fours like some deformed creature from a Hieronymus Bosch or Francis Bacon painting.

Then all hell broke loose. Long, harsh notes from the brass instruments, sounding like squadrons of World War II-era bombers circling ominously overhead, accompanied John’s repeated declaration “In the midst of life, I have had a vision!” (The American performance-artist Laurie Anderson – or, rather, her pre-recorded presence – played the voice of John, and John was physically portrayed by dancer Denise Fujiwara.) Furious outbursts of percussion added to the deluge, and vocally rising above the din were the Four Living Creatures (mezzo Bo Bárdos, and sopranos Neema Bickersteth, Carla Huhtanen and Xin Wang) who screeched fiercely from the front of the stage.

The appearance of the Archangel Michael (New Zealand singer and actor Kawiti Waetford), brought a sense of focus to the chaos. He was a tightly wound presence, elegantly attired, yet speaking in tongues and sticking his tongue out, Maori-style. His call for the seal of God to be placed on the chosen occasioned more outbursts: choruses singing and shouting “Avenge our blood!” and “Praise ye the Lord,” and a children’s choir singing “Beati qui lavant stolas suas.” (Blessed are they who wash their robes clean.)

The Antichrist (actor Brent Carver) made a cameo appearance in a business suit, declaring “God is dead,” in a soft-spoken voice. His seductive call for humanity to “Sing of the joy of computers, a narcotic to the brain,” had much more to do with Schafer’s personal beliefs than anything in Revelation. A bald-headed Whore of Babylon (performance artist Nina Aresenault) presented arcane gestures in skimpy leather harness. But most outlandish in this phantasmagoria was the Old Woman (Inuit throat-singer Tanya Tagaq), the sole survivor of the destruction of Babylon. Her performance was a outpouring of grunts, gasps, gurgles and groans that seemed drawn from the centre of the earth.

“The Vision of John” led without an intermission to the “Credo.” While there was plenty of action in Part I of Apocalypsis, Part II was visually sparse, the performance space empty save for two reflecting pools of water and a long staircase at the back of the stage. However, Part II was sonically sumptuous, with massed choirs in the balcony and on stage enveloping the audience in the music of the spheres.

The Beast reappeared, pacing back and forth on his hands and feet. With glacial slowness, dancers (including members of Ponifasio’s own company, MAU), climbed the staircase, shedding their garments along the way. Finally, a man painted white (New Zealander Ioane Papalii) – wearing only a penis sheath, like a Papua New Guinea tribesmen – descended from the stairs and walked into one of the pools of water. And that is how Apocalypsis came to its conclusion.

Schafer’s score is a fascinating yet “difficult” work of art. It’s an uneven masterpiece, with brilliant moments and problematic transitions, and with striking sonic effects but also effects that look better on paper than they sound. Apocalypsis is a challenge to mount not just because of the large number of performers required, but because it offers no single path for a director follow. Especially in Part II, there’s not much in the way of explicitly laid-out dramatic instruction.

Ponifasio clearly welcomed his task: to stage a sprawling, multifaceted work that was little-known and wide open to interpretation. Drawing on a vast array of inspirations – including influences from his own South Pacific region – he proved himself equal to his task. Throughout the production, there was nothing commonplace or clichéd about this Apocalypsis. On the contrary, Ponifasio’s conception was consistently daring, novel and exotic. His performers rose to the occasion – a chain of 1,000 links, none of them weak. Together, they created a powerful and grandiloquent theatrical experience.

But do the End of Time and the Kingdom of Heaven have to look so dark and dreary? The London Apocalypsis – with a mere 300 performers – was modest compared to Luminato’s extravaganza, but it was a brighter and more vivid show. Ponifasio’s relentless black-and-white austerity (a trademark of his work, according to the program notes) cast a bleak, colourless pall over Part I, and didn’t make Part II look much more interesting.

If Apocalypis is ever again remounted – and I hope it is – I fully expect that whoever stages it will re-invent the piece once again. However, the next director may be aided by the compact disc of Luminato’s performance that’s currently in production. The whole thing can also be streamed online from the CBC Music website (www.cbcmusic.ca), free of charge, until June 2016.