Back from the Nightmare 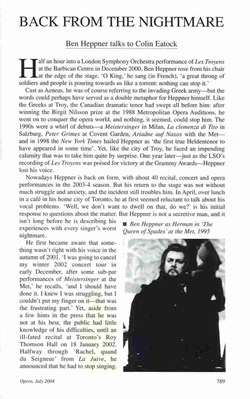 This article originally appeared in the July 2004 issue of Opera magazine.

Half an hour into a London Symphony Orchestra performance of Les Troyens in December 2000, Ben Heppner rose from his chair at the edge of the stage. “O King,” he sang (in French), “a great throng of soldiers and people is pouring towards us like a torrent: nothing can stop it.”

Cast as Aeneas, he was of course referring to the invading Greek army – but the words could perhaps have served as a double metaphor for Heppner himself. Like the Greeks at Troy, the Canadian dramatic tenor had swept all before him: after winning the Birgit Nilsson prize at the 1988 Metropolitan Opera Auditions, he went on to conquer the opera world, and nothing, it seemed, could stop him. The 1990s were a whirl of debuts – a Meistersinger in Milan, La clemenza di Tito in Salzburg, Peter Grimes at Covent Garden, Ariadne auf Naxos with the Met – and in 1998 the New York Times hailed Heppner as “the first true Heldentenor to have appeared in some time.” Yet like the city of Troy, he faced a impending calamity that was to take him quite by surprise. One year later – just as LSO’s recording of Les Troyens was poised for victory at the Grammy Awards – Heppner lost his voice.

Nowadays Heppner is back on form, with about 40 recital, concert and opera performances in the 2003/04 season. But his return to the stage was not without much struggle and anxiety, and the incident still troubles him. Over lunch in a café in his home city of Toronto, he at first seems reluctant to talk about his vocal problems. “Well, we don’t want to dwell on that, do we?” is his initial response to questions about the matter. But Heppner is not a secretive man, and it isn’t long before he is describing his experiences with every singer’s worst nightmare.

He first became aware that something wasn’t right in his voice in the fall of 2001. “I was going to cancel my winter 2002 concert tour in early December, after some sub-par performances of Meistersinger at the Met,” he recalls, “and I should have done it. I knew I was struggling, but I couldn’t put my finger on it – that was the frustrating part.” Yet aside from a few hints in the press that he was not at his best, the public had little knowledge of his difficulties, until an ill-fated recital at Toronto’s Roy Thomson Hall on January 18, 2002. Halfway through “Rachel, quand du Seigneur” from La Juive, he announced that he had to stop singing.

And stop he did: aware that his problems were serious, Heppner cancelled everything for the next few months, including a Royal Opera appearance in Tristan und Isolde. He sought out professional coaching in an effort to re-build his vocal technique, but to little avail. A tentative return in April, with recitals in Vancouver and Seattle, led only to further cancellations. Then, just when his prospects looked their bleakest, he received a surprising piece of advice. A doctor and amateur singer suggested that Heppner’s problems might have something to do with the blood-pressure medication he was on.

“I was taking an ACE inhibitor,” Heppner explains. “It’s a panacea for all sorts of things – a lot of people take it on a regular basis because it has all sorts of benefits.” But there are side effects as well, including changes to the body’s lubrication system that can affect the voice. And although he didn’t know it at the time, he was not alone. “Since then, I’ve heard of dozens of singers who have been on this medication. I heard one guy say, ‘That stuff will take two notes off the top.’” He went off the pills and dealt with his blood-pressure condition through exercise, cycling up to 40 miles a day. He also went on a strict diet, losing about 90 pounds – and rendering himself almost unrecognizable to audiences that knew him as “Big Ben.”

“The voice itself came back quite quickly,” says Heppner, “but what took longer was the confidence.” His cautious return to opera began in February 2003 at the Met, with Les Troyens – a massive work which, however, only calls for about 45 minutes of well-paced singing from Aeneas. “During Les Troyens in New York, I don’t think my voice was really there. I struggled a little bit with some of the duet.” His next big role was Tristan, at the Met in October, and with this performance Heppner felt he was at last fully recovered. “I think my Tristan went very well at the Met. I feel that I really stepped forward in a way that I had, perhaps, never done before,” he says with conviction.

If this were a fairy-tale, we might end here with “and he sang happily ever after.” But real life is not so facile, and adversity has a way of changing people. It’s perhaps fortunate that Heppner – who grew up poor in the remote town of Dawson Creek, British Columbia (where the Alaska Highway begins), and who persevered through some frustrating years at the outset of his career – was already no stranger to challenge. Once again he persevered, but his crisis transformed him – in some ways, he believes, for the better. “Looking back on it, it was great,” he says with a bemused smile. “I came to realize that although I couldn’t sing, my life had not stopped. I got a sense of perspective.”

Along with this change in his personal philosophy, Heppner seems to have also gone through a vocal re-adjustment: he’s become aware of a new baritonal quality in his lower register. “I think that’s partly because of age – maturity has started to work its magic, and that’s a good thing. Of course, I might lose some flexibility, but it’s not a bad trade-off, if I gain strength, power and colour. And if I need to slow down a coloratura passage a fraction to get the notes in, so be it.”

In a most un-fairytale-like turn of events, he hit a speed bump last December when fatigue forced him to cut short a recital in Toronto – in the same hall where his voice failed him three years earlier. What was supposed to have been a triumphant hometown event became a local scandale, with fans and critics wailing in despair. Throughout it all, Heppner remained calm. “I was embarrassed, but I wasn’t worried, because I knew that I was in very good vocal shape. There was nothing wrong with my voice, other than on that particular day. I had rehearsed too much. I had sung out too much. And there were some psychological things – I was almost reliving the previous concert in Roy Thomson Hall. But I knew I was in perfectly good shape.” As if to prove that his voice was fine, he pressed on with a North American recital tour, and soon bounced back. “I did a concert three days later in Vancouver, which was okay. And then in Montreal it was good, and then I went to Atlanta and it was great. The confidence had resurfaced.”

Although candid about his recent vocal problems, it’s apparent that Heppner much prefers to talk about what has gone right for him, rather than wrong, in the last few years. He speaks fondly of the interest he’s cultivated in Francesco Paolo Tosti, the Italian-born composer who established himself in England and taught singing to Queen Victoria’s children. For Heppner, Tosti is more than a passing fancy: he has adopted this musician – who wrote more than 400 songs before his death in 1916 – as his pet composer. Two years ago he recorded “Ideale,” an entire disc of Tosti repertoire, with a salon orchestra, his second disc for Deutsche Grammophon (DGG 471 557-2). And last summer, at Canada’s Stratford Summer Music festival, he presented a series of Tosti recitals in period costume, decked out in a pinstriped Edwardian suit and a straw fedora.

“Tosti didn’t try to be a serious composer,” Heppner acknowledges. “He was involved with the entertainments that were popular in Victorian England. He coached singers at Covent Garden, and he was listed by Verdi as one of the top voice teachers in the world. His Italian songs seem to have more substance to them.” Heppner’s explorations have been facilitated by a 14-volume edition of Tosti works currently rolling off the presses at Casa Ricordi. “I have 12 volumes at my disposal,” he explains, “and two have not been published yet. So I slog through them and try to find stuff.”

Optimistic by nature, Heppner also warms to the subject of the future. “Otello’s coming back into my repertoire, and right now I’m trying to get Lohengrin back in my mind. On a weekly basis I’m pressured to take on the Ring, but I haven’t actually accepted yet. I’ve avoided Siegmund, and also Parsifal, because of tessitura – they sit on the low side. But Parsifal is down the road, and Siegmund is a must do. I had a discussion with James Levine recently, and he figures I could walk out and sing Siegfried in Götterdämmerung right now. I haven’t really taken that to heart – I know I have to do it, but I haven’t really sat down for a week to learn the notes well enough to sing through it.”

In the immediate future, Heppner will return to Covent Garden in July as Peter Grimes – his debut role in London, and one of his “signature” characters. “I’m probably associated with the role because Vickers was associated with it,” he modestly suggests, invoking the Canadian tenor whose portrayal of the obsessed fisherman left audiences gasping. “I have a tendency to want to soften Grimes, to make him more likeable and more human. But sometimes the director has an axe to grind. In the last Grimes I did, in Paris, the director decided that it was all about Britten’s homosexuality. I think the theme is alienation. This opera has a universal theme – it’s not a special interest.”

After Grimes, he returns to the Met for Otello in September and to Chicago’s Lyric Opera for a gala concert in October. He then begins a recital tour – songs by Tchaikovsky, Sibelius, Grieg and Tosti – that starts in Boston but soon takes him across the Atlantic, to Lisbon, Dortmund, Frankfurt, Berlin, Dresden, Brussels and Barcelona. Other future engagements include a Tristan in Paris in April, an Otello at Covent Garden next June, Pagliacci in Los Angeles the following September, a Meistersinger in Berlin two months later, and another Tristan in Vienna in February 2006.

At the age of 48, Heppner is already starting to think about life beyond opera-stardom. “When you’re in the middle of your career, you should start thinking about the end of your career. I imagine I’ll teach afterwards – it’s a logical step. I’ve done a couple of masterclasses – I work less on the actual technique side of the thing and more on the 'head-space' side. If you have advanced students, they may have most of their tools already there. They just need to figure out how to get their heads around the music.”

But before Heppner forsakes the stage for the studio, he intends to appear in opera productions for at least another decade. “The year 2013 is the Wagner-Verdi anniversary, and I’d like to do a lot of both in that year. I hope enough work will come my way to be able to say I did my part.”