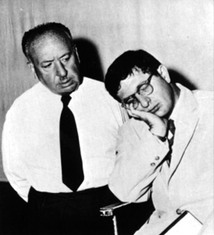 Hitch and Herrmann mugging for the camera.
This article originally appeared in the Winter 2013 issue of Listen magazine.

Film is a deeply American art. From the birth of commercial cinema to the present day, films made in the United States have consistently dominated this global industry. Through film, the world has received a vivid (if not always accurate) picture of America – its culture, values and ideals.

However, in the early years of movies with sound (the “talkies”), many of the film composers who rose to prominence were Europeans. Beginning in the late 1920s, Max Steiner, Erich Korngold, Miklós Rósza, Franz Waxman and other brilliant talents moved to Hollywood to ply their trade.

Understandably, these composers brought a European sensibility to their work, filling their scores with sweeping melodies and lush orchestrations, drawing on the grand traditions of Romantic opera and symphonic music. Richard Wagner’s leitmotif – identifying a character or event with a specific musical phrase – was a popular device. And it was Korngold who once remarked that Puccini’s opera Tosca was “the best film score ever written.”

In 1940, an ambitious young American composer entered the field. Bernard Herrmann was twenty-nine when he packed his bags and headed for California – and he soon distinguished himself from his Mittel-European colleagues with a modern, American approach to writing for film.

Even before he arrived in Hollywood, Herrmann had made a name for himself in his hometown of New York. While still a student at Juilliard, he was earning money as a violinist and a conductor on Broadway. In 1931 he founded the New Chamber Orchestra, which performed a wide range of repertoire (including his own works) in New York and Washington. And in 1934 he took a job at the Columbia Broadcasting Service, programming and conducting CBS’s radio orchestra – taking an interest in little-known composers such as Charles Ives and Roger Sessions.

His first major Hollywood project was for Orson Welles, who asked him to compose the music for Citizen Kane. It was a project that made Herrmann consider his feelings about the prevailing approach to writing for film. “I am not a great believer in the leitmotif,” he declared. “But its use was practically imperative because of the story itself and the manner in which it is unfolded.” He adopted the leitmotif – but on his own terms. For Citizen Kane, Herrmann’s identifying phrases tended to be short and trenchant, not the flowing, expansive melodies of other composers.

Also, his orchestration for Citizen Kane was unusually vivid. In 1941, Herrmann told The New York Times: “In orchestrating the picture I avoided, as much as possible, the realistic sound of a large symphony orchestra. The motion picture soundtrack is an exquisitely sensitive medium, and with skillful engineering a simple bass flute solo, the pulsing of a bass drum, or the sound of muted horns can often be more effective than half a hundred musicians sawing away.”

Herrmann spent most of the next three decades in Hollywood, composing nearly sixty scores for a variety of directors. His stock rose sharply in 1941 when he won an Oscar for the score to The Devil and Daniel Webster (originally released as All That Money Can Buy), which incorporated rustic American folk music. It was the only Oscar he would receive.

In 1955 he began his long-lived artistic collaboration with Alfred Hitchcock. It was Paramount Studios that paired up them up for a film called The Trouble With Harry. The English director and the American composer developed a mutual respect and a professional association that lasted eleven years. What’s more, they became close friends – and Herrmann wasn’t always an easy man to remain friends with.

Hitchcock’s remake of The Man Who Knew Too Much followed The Trouble With Harry. (It was the only film Herrmann ever appeared in, conducting the orchestra at London’s Albert Hall during the film’s climax.) After that came The Wrong Man, Vertigo, North by Northwest and Psycho. For The Birds, there was no musical soundtrack per se, but Herrmann served as sound consultant. The last Hitchcock film that used music by Herrmann was Marnie, released in 1964.

What made the Hitchcock and Herrmann partnership so special? In Herrmann, Hitchcock found a forward-looking composer who welcomed the opportunity to experiment with music and sound. Herrmann made use of modern devices: dissonance, polytonality and disjunct phrase structures. He also seemed to have a natural affinity for Hitchcock’s sense of suspense and timing. The composer once recalled, “I could never work from a script when scoring a Hitchcock film: it’s Hitch’s sense of timing that creates the suspense. You can’t guess the musical requirements ahead of time.”

Similarly, in Hitchcock, Herrmann found a director who understood the value of film music. “Hitch” was more respectful of film composers than most Hollywood directors were – and Herrmann’s music rarely ended up on the cutting-room floor. Where artistic autonomy was concerned, Herrmann was stubbornly insistent. “I have the final say about my music,” he said in a speech to music students at Eastman College in 1973. “Otherwise, I refuse to do the music for the film.”

Herrmann constantly experimented. He did all his own orchestration (rather than delegating this task to an assistant), and wanted to find the right sound for each new film. He used ten harps for the 1953 film Beneath the 12-Mile Reef, and for the 1966 film Fahrenheit 451, he reduced his “orchestra” to a pair of harps, vibraphone, xylophone and glockenspiel.

He always strove to be distinctive – and none of his film scores is more distinctive than that of Psycho. Working on a tight budget, Herrmann scored for strings only. The famous murder-in-the-shower scene, with its screeching violins, found its way into the film only at Herrmann’s urging. Hitchcock initially wanted no music for this scene, but when he heard the music that his composer wrote for it, he immediately understood how effective it was – and gave Herrmann a raise in pay.

The rift that ended the Hitchcock-Herrmann collaboration occurred during the making of the 1966 film Torn Curtain. Hitchcock was under pressure from Universal Pictures to bring a more popular style of music to his films, and to include a “title song” that radio stations would play to boost revenue. Herrmann had nothing but contempt for this idea and he ignored his director’s instructions. Instead, he wrote a jarring score, much like Psycho. When Hitchcock rejected the music, Herrmann said, “Look, Hitch, you can’t out-jump your own shadow. And you don’t make pop pictures. What do you want with me? I don’t write pop music.”

In Herrmann’s post-Hitchcock years, there were more films made with other directors – including Brian De Palma’s Obsession and Martin Scorsese’s Taxi Driver. But the split with Hitchcock only served to fuel Herrmann’s growing feelings of alienation from Hollywood. He left Los Angeles, moving to London in 1971. There, he entered into an agreement with the Unicorn record label to release LPs of his music: his film scores, a symphony, and his opera, Wuthering Heights.

Herrmann hated being called a “film composer” and throughout his career he composed a steady stream of concert works. Ironically, however, his success in the medium may have been an obstacle to his efforts in other genres. During his lifetime, he failed to secure a live performance of Wuthering Heights – a labor of love that he worked on from 1943 to 1951 – despite his repeated attempts to bring it to the stage. In 1982, seven years after Herrmann’s death, the opera was premiered by the Portland Opera in a highly edited form.

On December 24, 1975 – the day after he finished recording the music for Taxi Driver – Herrmann passed away in his sleep. In the years since his death, he hasn’t been forgotten. In 2005 the America Film Institute listed his scores for Psycho and Vertigo in its “Top 25 Film Scores” of American cinema. And in a development that Herrmann could never have foreseen, his film music is now finding its way into concert halls. Performances of his film scores – either in standard concert format or in multimedia “big screen” presentations – are growing in popularity. This season, Herrmann’s film music will be performed by the orchestras of San Francisco, Cleveland, and Seattle, among others.

The young conductor Joshua Gersen conducted three Herrmann concerts with the San Francisco Symphony in late October and early November – music from Vertigo, Psycho and other films. His study of Herrmann’s scores led him to a few conclusions about the composer.

“I became aware that he was a very well educated composer,” says the Miami-based conductor, “and that he learned a lot from the great masters. What’s interesting is how different all the scores seem to be – sometimes there’s a lush Romanticism, at other times he sounds like Berg or Shostakovich. He’s a kind of chameleon.”

Gersen continues: “But there’s also a common thread. He likes pulsating ostinatos, and chords out of Tristan und Isolde. And he’s very economical in the way he orchestrates. A lot of film composers use the whole orchestra all the time. But Herrmann saves the full orchestra for big moments – and that makes his music very effective.”

Film composers are often called upon to defend themselves in a way that other artists involved in the movie industry – writers, actors, directors, et al. – are not. And for those who questioned whether he was a “real” composer, Herrmann had a ready reply: “Real composers welcome any opportunity to write music, and any composer who disdains writing music for films, radio or television, or any other medium, is doomed to oblivion.”

Nearly forty years after his death, Herrmann is showing no sign of fading to black.