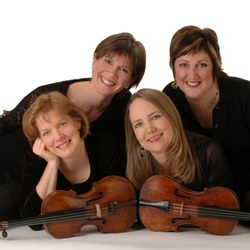 The Lafayette String Quartet.
This article originally appeared in the November 2011 issue of The Strad magazine.

The first thing that’s apparent when the Lafayette String Quartet walk on stage is that they’re all women. But when they play, something less obvious can be seen: although their sense of ensemble is impeccable, the Lafayettes glance at each other far less than some quartets do. After 25 years, they have found other ways of communicating.

A quarter of a century is an impressive milestone for any chamber ensemble – but a quarter-century without a single personnel change is indeed remarkable. From their first concert, in Detroit in 1986, to the present day, the Lafayettes have always been violinists Ann Elliott-Goldschmid and Sharon Stanis, violist Joanna Hood and cellist Pamela Highbaugh Aloni, cello.

But when I asked them “How many concerts have you played together?” – during a post-concert interview this summer in the Canadian resort-town of Parry Sound, Ontario – they looked at each other, each hoping someone else might have an answer. The question hung in the air: nobody is keeping score. However, the Lafayettes have other ways of measuring what they’ve accomplished. “We’ve all given half our lives to this quartet,” says first violinist Elliott-Goldschmid with quiet solemnity.

The Lafayette String Quartet can trace its origins back to the town of Bloomington, Indiana – and to Rostistlav Dubinsky of the original Borodin Quartet, who taught at Indiana University following his defection from the USSR in 1975. Three of them (all but Elliott-Goldschmid) met as students at IU in the mid-1980s, and played in quartets with Dubinsky. Shortly after, in 1986, they met their first-violinist-to-be in Detroit. Elliott-Goldschmid had an indirect connection with Dubinsky: she had studied with Diann Pilafian of the Primavera Quartet (among other teachers), who had studied with the famous Russian quartet player.

Dubinsky hovered over the Lafayettes like a benevolent godfather. “He would say, ‘What ever you do girls, keep the quartet!’” recalls Stanis. “And on our tenth anniversary, he wrote us a note: ‘My sincere condolences on your first 10 years of hard labour in a string quartet. May Almighty God give you strength and wisdom to keep the quartet as long as you live.’ It’s on the bulletin board in my studio.”

The young ensemble coalesced in Detroit – gigging and teaching around town, and continuing studies with the Cleveland Quartet. And when it was time for the players to enter their first competition, they realized they needed a name. Detroit’s Lafayette Avenue (named for the French general who helped the Americans win their revolution) was a serviceable inspiration, and the name stuck. The Lafayettes did well in competitions, winning prizes at the Portsmouth International String Quartet Competition and the Fischoff National Chamber Music Competition.

Their first big international break came in 1986, thanks to a disaster half a world away from Detroit. When the Chernobyl reactor melted down, fears of radioactive fallout spreading across Europe led a prominent quartet to cancel a concert in Munich. Bravely, and on short notice, the Lafayettes stepped in and flew to Germany. They weren’t about to let a little radiation stop them.

By 1988, Musical America had dubbed them “young artists to watch” – and the Lafayettes were busily making themselves heard on the chamber-music scene in the US. Well established in the Detroit area, they found the city a convenient base, with ready access to American cities in the Northeast and Midwest. But three years later, their careers took them in a direction they would never have predicted.

In the Canadian city of Victoria, British Columbia, the local university was looking to expand its music program, and went looking to hire a quartet-in-residence. “Paul Katz of the Cleveland Quartet was president of Chamber Music America at the time,” explains Highbaugh Aloni. “The university got in touch with him and asked if he knew of any young quartets who might be interested in auditioning for the job. Paul gave them our name.”

When the Lafayettes flew to Victoria in December 1990 to have a look at the place, three had been there previously. Hood and Highbaugh Aloni (who both hail from the US West Coast) had visited on family holidays; Elliott-Goldschmid (the only Canadian-born member of the quartet) had attended a summer music camp nearby. Stanis, originally from Cleveland, admits that until she visited Victoria she’d never heard of the place. But the quartet and the university hit it off, and the Lafayettes headed west.

Located at the southern tip of Vancouver Island, Victoria has its attractions: it’s a peaceful, pretty, mid-sized city, famous for its lovely gardens, and it enjoys the mildest climate in Canada. But it’s also an out-of-the way place, well removed from the musical capitals of the world. And for the last twenty years, the Lafayette Quartet has been based there, teaching at the university, performing locally and touring internationally. And the Lafayettes aren’t shy to admit that Victoria has changed them. In fact, they’re quite proud of it.

“We did a lot more concerts when we were living in Detroit,” notes Hood, “because we could drive to other cities easily. But we were spread out, and had to do a lot of commuting just to practice. In Victoria we’re all in the same place – and that was a big change.”

“In Victoria, we’re free to look into ourselves and create the music we want,” proposes Highbaugh Aloni. “I think we have more freedom to be ourselves than if we were one of several professional quartets in the area.” In Victoria they’ve also forged links with other musicians in their community, and play in a local string orchestra called the Galiano Ensemble.

Another Victoria-based musician who has often worked with the Lafayettes is bassist Gary Karr. “They’re a fixture of the community here,” he says. “And the enthusiasm they’ve generated is amazing. They’ve gone into all the schools – I don’t think there’s a venue in Victoria where they haven’t played. They’ve been able to reach more people than any other cultural entity in town.”

As for the apparent isolation of their home city – off the western edge of the North American continent – they insist that it’s simply not an issue. Says Stanis: “I have a colleague who plays in a high-profile piano trio, and she says, ‘If you’re not on the East Coast, no one takes you seriously.’ But I have not found that.”

Another non-issue for the Lafayettes is the fact that they’re all women. People notice, of course – and some may wonder if, on some level, it matters. In a 1990 review of the quartet at New York’s Frick Collection, James Oestriech of the New York Times touched on the subject when he felt the quartet was playing a little too loudly for a small room. “One hopes that the problem was merely scale,” he began, “and that these players, as women, are not tilting at stereotypes; they are far too good and strong to have to worry about that.”

The Lafayettes are quick to point out that they’re by no means the only all-female quartet: in the USA alone they were preceded by the Primavera Quartet (now defunct), as well as by the Colorado and Cassatt quartets. And they’re quite disinclined to believe that they’re tilting at anything. Hood says: “We’ve never sat down to rehearse and consciously said, ‘We have to be careful not to sound like women.’”

However, there is one gender-related issue that has forced itself upon the Lafayettes, and tested the group’s strength. Ten years ago, Highbaugh Aloni was diagnosed with breast cancer. The crisis passed – she’s fine now – but it proved to be a defining moment for the quartet.

“It was life-changing,” recalls the cellist. “I was a young mother, and my child was just starting kindergarten. I think it changed me as a player – and the reaction of the quartet changed how I felt about being in the group. At that time, we were the first all-female quartet invited to play in a Beethoven cycle in Berlin. And my surgery was to happen right before we were to go. I thought maybe I’d be okay for the trip, but I was looking at the possibility of more surgery. And that’s when they all said, ‘Let’s just not go.’”

“We were strongly urged to get another cellist,” says Elliott-Goldschmid. “But we said no.”

This harrowing experience inspired the Lafayettes to create their Health Forum, in 2005. It’s a free annual event at the university, where they play a short concert and invite a panel of medical specialists to speak on a chosen health topic. (This year’s topic is mental health.) It’s free, and its purpose is to raise awareness about advances in treatments.

The Big Question: how have the Lafayettes stayed together, without a single personnel change, for 25 years? We know part of the answer already. Dubinsky’s influence and support, right from the start, was a source of strength and unity. And the quartet’s two-decade residency at the University of Victoria has provided the players with a stable and close-knit working environment.

Also contributing to the Lafayettes’ cohesion was the generosity of yet another Canadian university. In 1992 the University of Saskatchewan lent the quartet a set of Amati instruments for a five-year period. (The instruments are now in the hands of the U of Saskatchewan’s own Amati Quartet.) “It was a great education,” says Stanis, “because the instruments were matched in a special way – and none of us had experience with instruments of that character. It encouraged each one of us to seek out a special instrument that would work well in the quartet.”

But even with all the support and opportunities in the world, a quartet’s longevity is ultimately founded on its own internal chemistry. And according to Elliott-Goldschmid, communication is a key factor. “Looking back on it,” observes the violinist, “we went through phases, like any relationship. As we went through them, we learned how make music better, how to communicate, how to support each other. I brought my style of arguing to the quartet from what I’d learned as a kid, and so did everyone else. We went from unhealthy things to more healthy things. When I see other chamber groups, I’m sometimes amazed at how people treat each other. We can be intense, but we’ve developed open, communicative and respectful ways of dealing with each other – most of the time!”

So what’s next for the Lafayette String Quartet, as they enter their second quarter-century? Even after 25 years, the players don’t lack for fresh ideas. Hood wants to play full Shostakovich and Bartók cycles. Stanis wants to commission more new works. Highbaugh Aloni points out that they’ve yet to play much Schumann.

Says Elliott-Goldschmid: “We’re working with more and more wonderful composers all the time. But I’m also very interested in continuing to delve into the great literature. There’s just so much of it that we haven’t really done – Dvořák and Schubert, for instance. It’s endless, and we’ve only scratched the surface.”