Salzburg, 50 Years After The Sound of Music 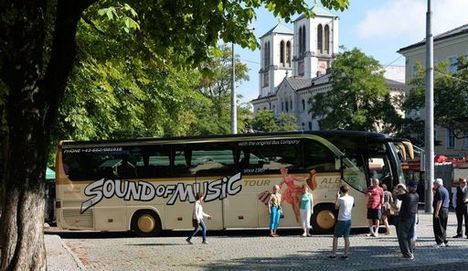 "Sound of Music" bus tours can be seen all over Salzburg.
In March 2015, I flew to Germany to hear performances of my composition Tears of Gold (2000), in Stuttgart and Tübingen. Shortly thereafter, I travelled to Salzburg, Austria, where I wrote this article for the Houston Chronicle.

The hills are alive, with the sound of music!”

Those lyrics invoked Salzburg and its surroundings when The Sound of Music first hit the big screen in 1965. Half a century later, the words still suit the picture-postcard Austrian city, on the Salzach River in the Tyrolean Alps.

In its own way, Salzburg is as musical a place as Nashville or New Orleans – and music is one of the main reasons that 2.5 million tourists visit every year. For this, the Salzburgers have two local families to thank: the Von Trapps and the Mozarts. These names are forever connected with music, and also with Salzburg.

Across the street from the Mirabell gardens – where the finale of the “Do-Re-Mi” song was filmed – buses line up to take tourists on Sound of Music tours. Eager fans climb on board, to be transported to places where scenes were shot. These people range from merely curious to the utterly obsessed. (On the tour I took, one woman claimed to have seen the film more than 40 times.)

The tour stops at the little lake behind the Leopoldskron Palace, where Maria (a.k.a. Julie Andrews) and the Von Trapp kids tip over their rowboat. A little further away stands the gazebo where Maria and Captain Von Trapp (Christopher Plummer) exchange a kiss. And in the nearby town of Mondsee, there’s the ornate cathedral where the couple gets married in a big wedding scene.

As this year marks the 50th anniversary of the release of The Sound of Music, the local tourism industry is preparing for a busy vacation season. Salzburg’s renowned Marionette Theater will stage a puppet version of the movie, from May through September. And there’s a “Sound of Music” gala planned for October 17 in the Salzburg Festival auditorium. This summer, the hills will be alive with the sound of tourists.

Yet, ironically, even though The Sound of Music is the fifth-highest earning film ever made, it’s never been very popular in Austria. Not even in Salzburg – where the Von Trapps were a well-known and respected family – is the movie held in high regard.
“Most Salzburgers either don’t know it, or don’t like it – or both,” one tour-guide told me.

However, Mozart is a different story. Wolfgang Amadeus was born into a family of Salzburg musicians in 1756. His father, Leopold, realized he had a little genius on his hands, and toured him all over Europe. Although Mozart lived just 35 years, he was amazingly prolific, penning some of the finest classical music ever written.

Today, Mozart is proudly displayed all over town. There’s a Mozartplatz, with an imposing bronze statue of the composer. Not one, but two houses where the Mozart family once lived are now museums – one in the old town, and the other in the new town. (By the way, the “new” town, on the southwest side of the river is about 400 years old. The old town, on the northeast side, dates back 1,300 years.)

The city’s music conservatory is named the Mozarteum, and one of the Salzburg Festival’s auditoriums is called the Haus für Mozart (“House for Mozart”). Molzartkugel chocolates are sold everywhere – there’s also a Café Mozart, a Mozart Shirt Shop and you can even buy a “Mozart kebab.”

One again, there’s an irony – truth told, Mozart didn’t much like his hometown. And he particularly despised Salzburg’s ruler, an aristocrat with the double-barreled title of “Prince-Archbishop.” When Mozart was 25 years old, he decamped for Vienna, in search of better prospects.

It was Mozart’s connection with the city that inspired the impresario Max Reinhardt to establish an annual celebration of music and drama in Salzburg, in 1920. Nowadays, the Salzburg Festival is one Europe’s biggest summer arts events. Programming ranges from intimate recitals to full-scale opera productions.

Artists appearing this year (between July 18 and August 30) include tenor Plácido Domingo, pianists Maurizio Pollini and András Schiff, the Vienna Philharmonic Orchestra and many more celebrated names. Houston Symphony conductor Andrés Orozco-Estrada leads the Mozarteum Orchestra at the festival from July 25-27. Ticket prices at the festival range from six to 430 euros, and some of this summer’s performances are already sold out.

“The Rome of the North”

Salzburg glitters with architectural gems. While there are a few contemporary splashes here and there – such as the Museum der Moderne, perched up on Mönchsberg mountain – most of the city’s prominent buildings date from the medieval, renaissance and baroque eras. Although Salzburg was damaged in World War II, it was meticulously restored in the post-war years.

There are 45 churches in Salzburg – 44 are Catholic and one is Protestant. The grandest is the Dom, the cathedral completed in 1628, in an ornate Italian baroque style. And directly across from the Dom stands the Prince-Archbishops’ 180-room palace, the Residenz. Splendid buildings such as these made Salzburg “the Rome of the North.”

Yet for all of the city’s claims to grandeur, Salzburg remains a compact, walkable place. And in the old town, walking is a necessity, as most of it is closed to cars. It’s fun to get lost in the narrow, cobbled streets and passageways.

For centuries, the old town was a regional center for commerce – full of merchants, craftsmen and tavern-keepers. Today it’s all about the tourist trade, and the shops are enticingly laid out with retail goods. (Window-dressing is considered an art form in Europe, and the Salzburgers do it beautifully.) Franchised luxuries such as Swarovski watches and Gucci handbags are everywhere. But there are local jewelers, clothing designers, artisans and antique dealers who offer unique wares to their customers, as well.

The old town also is dotted with hotels. Rooms tend to be small, but they’re full of charm and character – and the location can’t be beat. The medieval “gasthaus experience” starts at about 100 euros per night.

Across the river, in the new town, there’s more shopping, dining and accommodation. The city’s oldest beer-cellar is here, improbably buried inside a modern Crowne Plaza Hotel. And the café of the Hotel Sacher – a branch of the Viennese establishment – serves the famously delicious Sachertorte chocolate cake.

Looming ominously over the city is Hohensalzburg fortress. Construction began in 1077, and the thickly walled structure was expanded over the next 500 years, until it was the largest castle in Central Europe. This is one part of Salzburg that isn’t walkable, unless you’re looking for a good cardio workout. A funicular railway whisks visitors up into the castle, where the view is spectacular.

Beyond the city, the idyllic Tyrolean landscape beckons. There’s plenty of skiing in the winter, and in the summer there are resorts on the small lakes that dot the countryside. If you’re looking to spend as much money as possible, the Mozart suite at the Schloss Fuchl Resort and Spa costs 9,200 euros per night in the summer (double occupancy).

For those staying right in Salzburg, there are day trips. To the south are the salt mines near Hallein. (Salzburg literally means “salt-town,” and it was salt from nearby mines that first made the city wealthy.) Now the mines are a museum, offering visitors a tour of the centuries-old operation. And just across the border, in Germany, is the Eagle’s Nest – Adolf Hitler’s retreat, built 6,000 feet up a mountain. It has a more benign purpose today, as a restaurant.