Valentina Lisitsa, In Other Words 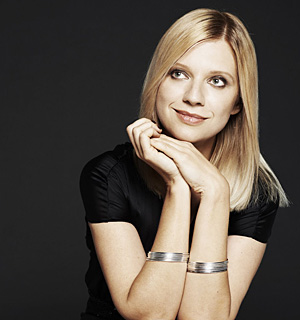 There are many pianists, but there is only one Valentina Lisitsa. She’s classical music’s first “YouTube sensation,” who famously became famous by posting clips of her performances on the popular video-sharing website. Since 2007 the 41-year-old musician with flowing blonde hair has posted about 200 clips online, receiving about 80 million views worldwide. Today, she has an international career and a recording contract with the Decca label.

In retrospect, it almost sounds easy – all she needed was a piano, a camera, a microphone, and some technical know-how. But scratch below the surface, and it’s clear that this particular kind of success could only have been achieved by a particular kind of artist. Lisitsa has always refused to play by the rules of the classical music industry, or to accept the decisions of its gate-keepers. She’s determined, opinionated, street-smart and not afraid of a fight. (And she certainly found herself in the midst of a fight in Toronto, in April. We’ll get to “Lisitsa vs. the Toronto Symphony Orchestra” a little farther down.)

She proudly acknowledges her outsider status in the music business. “Yes, definitely yes!” she declares, in her thick East European accent. “I am an outsider. The music establishment looks at me that way. Sometimes critics may say something like, ‘For a YouTube pianist, she’s not so bad.’ I try to take it in stride, but I know where I stand.”

Born in 1973 in Kiev, of mixed Polish-Russian-Ukrainian ancestry, she followed the path that the Soviet system laid out for prodigies. She attended the Lysenko School for Gifted Children (where she studied music and also chess) and then the Kiev Conservatory. In 1991, she and the pianist Alexei Kuznetzoff won first prize in the Murray Dranoff Two Piano Competition in Miami, Florida. The duo moved to the USA, married, and settled down in North Carolina.

But Lisitsa was in for a rude shock when the big career that her competition victory seemed to tantalizingly offer failed to materialize. “My school in Urkaine was like so many music schools,” Lisitsa recalls. “We learned music, but nobody taught us the business. Today in music conservatories this is starting to change – there are courses in promotion. But I was not taught.” Frustrated, she thought of other lines of work. Maybe she could be a translator for the CIA? For a while she sold housewares on eBay.

As Lisitsa tells it, she started making YouTube videos almost by accident. “The first video,” she says, “was an obscure Rachmaninoff étude, Op. 39 No. 6. It was done as a project at the University of Miami for film students, so they could learn how to make music videos. I was their guinea pig. Today I find it painful to watch, because the resolution is poor. Now my videos are elaborate productions. My husband learned how to make videos, and record sound. We have good quality.”

Lisitsa created more videos, posting them on YouTube, and their popularity grew by leaps and bounds. Then things started to happen. “By the time I got to 40 million views, I was on the record companies’ radar screens,” she notes. “I had meetings with several labels, over a few years, before I signed with Decca. I talked to another label, and they wanted to know more about my success – as if there was a trick behind it. They were incredulous. I decided not to sign with them. But Niall O’Rourke, the head of Decca, really believed in me. It was an easy decision, and we learned from each other as we went.”

She vividly remembers her 2012 appearance at London’s Royal Albert Hall as her biggest leap from the screen to the stage. “When they called me,” she says, “they wanted to know how YouTube popularity would translate into ticket sales. It was an experiment on both sides, and the pressure was enormous. A lot of YouTube stars try to cross the barrier, but very few people have actually succeeded. Maybe some people wanted me to fail. I felt a lot of weight on my shoulders.”

Lisitsa stands out as a rare example of self-made success in a musical culture where progress is often governed by a tight-knit network of mentors and their protégés. And well aware that she doesn’t owe anyone anything, she sports an edgy, independent attitude. According to a 2013 New York Times interview, “Lisitsa, a self-described ‘contrarian,’ is argumentative and outspoken, tweeting about politics and berating concert promoters who have irked her.”

In April, Twitter, politics and concert promoters swirled together into a perfect storm in Toronto. It was the kind of dispute that’s usually kept under wraps in the scandal-averse classical music world. But when Lisitsa started talking in public, it became an open war of words. The origins of her conflict with the orchestra lay in a real war – the kind with bullets and bombs – happening half a world away.

For the last year, Lisitsa has been tweeting about the conflict in Eastern Ukraine. As the fighting intensified, so too did her rhetoric. She compared the current government of Ukraine to Nazis, and invoked images of the Holocaust. Her tweets were sarcastic, angry, bitterly ironic and definitely not nice.

Yet until her Toronto concerts, her opinions didn’t generate much response on this side of the Atlantic – nothing more than a small protest by Ukrainian nationalists when she appeared with the Pittsburgh Symphony last October. However, when Canadian supporters of the Kiev government heard she’d be playing Rachmaninoff’s Piano Concerto No. 2 with the Toronto Symphony Orchestra, they besieged the orchestra with letters of protest.

In an effort to distance the TSO from Lisitsa’s controversial views, Jeff Melanson, the orchestra’s CEO, replaced Lisitsa with the Toronto pianist Stewart Goodyear. But Lisitsa wasn’t about to go quietly (even though the TSO agreed to pay her full fee for the engagement). On Twitter and Facebook, she objected to Melanson’s decision – suggesting that the orchestra had caved in under pressure from donors, politicians and a vocal minority claiming to speak for all Ukrainians.

Although Melanson denied that pressure from wealthy or powerful parties was a factor, he confirmed that the TSO’s cancellation was indeed due to Lisitsa’s tweets. “They were beyond political opinion,” he told the Globe and Mail newspaper. “They were strong texts that were very intolerant in the way she frames her criticism of people.”

Toronto’s chattering classes divided themselves into pro- and anti-TSO camps. Supporting the TSO’s decision was a thrown-together coalition of Ukrainians and people opposed to “hate-speech.” On the other side of the debate was a similarly ad-hoc alliance of Russians and free-speech advocates.

And the mess got messier when Goodyear became the target of hate mail. “Words of bile and hatred were hurled in my direction from all sides,” he said in a public statement. As well, he insisted that when he agreed to step in for Lisitsa, he hadn’t been told why she wouldn’t be appearing. Wanting no part of the conflict, Goodyear withdrew from the program. When the TSO finally played the troublesome concert, on April 8 and 9, there was no concerto on the program.

For her part, Lisitsa, flew to Toronto – even though she knew she wouldn’t be performing with the TSO – determined to find a hall where she could give a recital. But no hall could be found, and she left town without playing a note in public.

“I’ve been on Twitter for three or four years,” says Lisitsa. “I used it for my views as a citizen on many subjects – it was not about Ukraine until last year. People call me the ‘pro-Putin pianist.’ I’ve been quite harsh on Putin, and I tweeted about the Pussy Riot affair. But those things are forgotten, conveniently.”

As for the political situation in her homeland, she insists that her views are actually quite moderate. “When the revolution came, I was hoping for real change in Ukraine. But when people started getting killed, it was horrifying. My position is along the lines of the European Union. First, they need to stop the war. And to pacify Ukraine, you need to have a federation – like Switzerland, which has a national anthem sung in three languages. It’s best for people on the ground to decide on self-government for each region. It’s nothing radical.”

Now that the TSO incident is behind her, does Lisitsa feel that she mismanaged the situation in any way? Has she harmed her public image by wading into a divisive political issue? Not likely.

“When you worry about managing a public image,” she argues, “then you become corporate, serving corporate interests. Maybe some people would prefer me to be an upbeat star who tweets, ‘Look at the quiche I’m eating,’ or ‘I’m so excited to play with such and such an orchestra.’ And I know that sometimes musicians select causes like the environment or animals – things that everyone agrees about. But if they call that a good public image, I’m not on board with them. I stood up for the human rights of my people.”

A couple of years ago, Lisitsa decided to relocate with her family to Paris, for several reasons. “I started to gradually move two years ago,” she says. “Now both my pianos have been moved from the USA. I spent almost 20 years in the US, and I felt it was time to come back. I feel that my heart lies in Europe.”

As well, she’s concerned about the political direction the US is taking – “with all the wars, and limitations of freedom, and a government that says it’s all for our own good. I’ve talked to a lot of expats from the Soviet Union, and we feel that the place we escaped from is coming back in a strange way in the United States.”

Yet she’s grateful to America as the place where she was able to create the career she wanted – in her own, unique way. ‘If the American Dream is making your own life with your own hands,” she states, “then America was fantastic for me.”